Set up a still life group and select objects that either seem to connect naturally, or deliberately contrast or clash. Make a drawn study that shows understanding of the forms, and of the connections and spaces between the forms. Concentrate on patterns, textures and shapes. Tone can be indicated, but this is principally an exercise about line.

Making sketches in gardens of flowers and seedpods, I found that these lend themselves very well to line drawings. My sketches reminded me of old-fashioned diagrams drawn by exploring botanists. 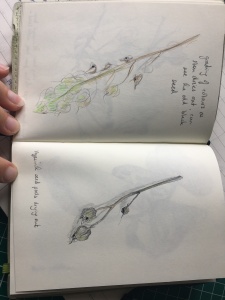 Inspired by the example illustration in the course guide (Carol Smith, Driftwood, 2010), I tried white ink on black paper. It feels unconnected to the subject matter and therefore contrived. My next studies were on white cartridge paper with various media, as per annotations.

I absolutely love the seedpods of this wild sweet-pea – they are so striking in their colour; dark brown, almost black, and their form once opened is spiral twists with the occasional seed trapped in the spaces between. I managed to find a sprig that has an intact pod amongst the open ones. The aquilegia pods are such interesting gnarled forms, very different from their highly uniform but complex flowers. The wood hyacinths remind me of some sort of musical instrument and I like the closely repeating pattern they follow up the stalk. Lastly I chose nigella pods. These are favourites of mine, because they have a lush full shape surrounded by masses of feathery tendrils, and they are all different sizes and colours. 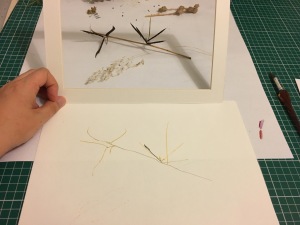 Composition: I found this lovely old-fashioned terracotta pot in the shed, and half an old brick left over from when I edged my lawn a few years ago. The pot is fairly clean, just some dusting of old soil in it, but the brick has been outside for many years and has a fur of moss over much of the surface. I like the way this is a mixture of man-made and natural and ties the piece together. 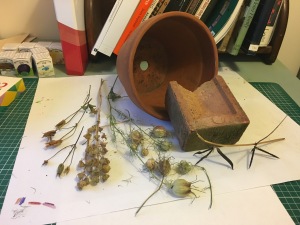 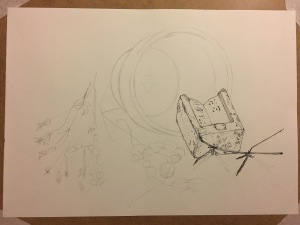 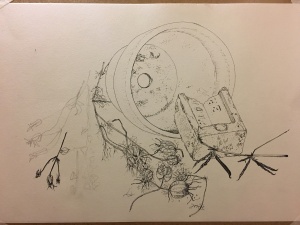 I found it quite counter-intuitive to not use any tone, but I like the overall effect of not doing so. I realise that it seems as if I have put a shadow under the brick, but this is merely unfortunate the position of soil in the pot and was pointed out to me by a fellow student!

I was very struck by the impact of adding a simple horizon line. I debated with myself for a while about doing it and even drew it in pencil first, but I think it was right to add it; the drawing needs it in the absence of tone.

I deliberately put the most chaotic forms, the nigella, in the middle and allowed the more structural shapes to frame them. I found that a 0.2mm drawing pen was very effective for this kind of delicate work, and I was still able to vary the type of mark I made, even with such a narrow tip.