The ‘Still Life’ genre, from the Dutch “stilleven”, is the depiction of inanimate subjects, either man-made and/or natural objects which do not move or are dead. In the seventeenth century, the French Academy established a ‘hierarchy of genres’ in which still life was ranked lowest after history, portraiture, genre-painting and landscape. Landscape and still-life were considered less important because they contained no human forms, and that the painting of lowly immobile objects was merely a technical exercise and not a ‘divine’ pursuit.

Whilst depiction of such objects occurs in antiquity, Still Life did not arise as a distinct genre until the sixteenth century. Various sources cite many different artists as being the originator of the genre but they generally agree on the timing as being early 1500s. These fore-runners include Jacopo de’ Barbari with his 1504 piece ‘Still-Life with Partridge and Gauntlets’ (visual-arts-cork.com), and Pieter Aertsen, who ‘anticipated pure still life, seen for itself’ (Piper, 2000:162) in works such as ‘Christ in the House of Martha and Mary’ (1559), ‘interposing huge piles of food and flowers between the observer and the central scene’. 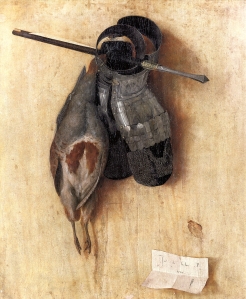 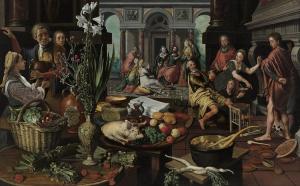 With the development of oil paints and techniques during the Renaissance, artists were able to achieve high levels of realism in their work, which likely drove more close observation of form and tone of a wider range of subjects. The rise of scientific thinking also prompted artists to begin painting secular scenes, a practice first seen in Italy, which then spread outwards into the rest of Europe. The popularity of still life increased in Northern Europe during the Reformation, which further released people from the controlling influence of the church and saw a decline in religious painting. It is interesting to ponder such works as Aertsen’s 1551 piece, ‘A Meat Stall with the Holy Family Giving Alms’ against this social backdrop and wonder if the inclusion of the human figures and the title were ironic when clearly he takes far more interest in and care over the still life in the foreground.

There are sub-genres within still life. Memento Mori is a Latin phrase meaning ‘remember you must die’. They are artworks ‘designed to remind the viewer of their mortality and of the shortness and fragility of human life’ (tate.org.uk), and typically contain skulls, and often symbols of time passing like clocks or hourglasses. Related to this is Vanitas still life, which expresses the view that worldly pleasures are worthless. These are of subject matter such as musical instruments, wine, books.

While reading around this subject, I was stunned by Hans Holbein (the Younger)’s 1533 piece, The Ambassadors. It contains a skull that is so distorted by a ‘mathematically exact trick of perspective’ as to be unrecognisable, but when viewed from an oblique angle, can be seen in its true form. ‘When it is so seen, the two men blur, and eternal death overtakes all’ (Piper, 1981:156). I find this piece astounding in its innovation. It is completely drenched with symbolism and I find it fascinating that it is nearly 500 years old. 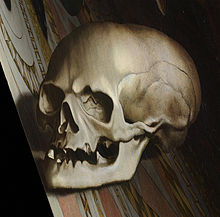 The artists used various methods to direct the viewer’s attention to the subject matter, some used spatial compression, foreshortening the background, for example with a physical wall as in the de Barbari piece above, or surrounding the still life with impenetrable shadow. Others, like Aertsen above, filled the negative space with less distinct subjects.

There is an overwhelming amount and variety of information and opinion available about the work and influence of Cézanne. Having read chapters and articles ranging from dry and factual to pretentiously nonsensical, I found a quote online that seems to succinctly reflect my thoughts. The following can be found in the ‘Legacy’ section of the Cézanne page of theartstory.org; ‘When looking at Cézanne’s late work, it is impossible to miss the emergence of a unique artistic approach. The rules of the Academy completely abandoned, and the aesthetics of Impressionism having been successfully employed but not copied, Cézanne offered a new way of comprehending the world through art’.

My personal response to his still life work is one of affection, born of familiarity. I find the homely and seemingly naïve portrayal of the form, tone and arrangement of subjects really beautiful and instantly recognisable. The knowledge that he could spend hundreds of hours on a piece leaves me wanting to know what it was he was pursuing. 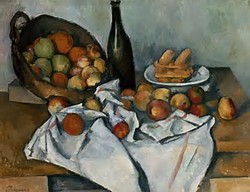 Early Cubism ‘rejects naturalistic colour, Renaissance perspective (and) consistent lighting…. subjects being sometime not only arbitrarily lit, but seen from slightly different angles’ (Piper, 1981:396-397). The movement was led by Picasso and Braque, ‘working together so closely that it is difficult to separate their work’ (Arnason, 1969:193), indeed Piper (1981:397) describes the question of primacy as ‘controversial, and perhaps otiose’. Still life was the principle subject.

The artists broke up the lines of the subject matter and used colour and tone in expressive ways. Negative space was often treated in the same way as the positive, making the subject indistinct from its surroundings at first glance.

There is a clear Cezanne influence to Tom Brown’s work. He uses vibrant colours and lots of light, often grouping fruit with reflective items, particularly glass.

He has ‘push(ed) the traditional still life in a new direction’ with his ‘Not-So-Still’ still life series. It is quite amusing; the fruit appears to be zooming into the frame. It occurs to me that this could be interpreted as specifically exaggerating Vanitas as it shortens duration even further… “all things will soon be gone” and these things only just got here so they’re even more fleeting.

Margaret Morrison uses oil on canvas to create large hyper-realistic pictures. This exhibition features confectionery and toys. Food has always been a staple of the still life genre, but Morrison brings this right up to date by choosing modern subject matter. There is little or no negative space so that the focus is entirely on the subject, but still she does something interesting in a few where the subjects cast multi-coloured shadows by virtue of their translucency (Gummy Worms, 2007) or she evokes a slightly reflective surface underneath by adding colour to what, at first glance, appears to be a simple shadow (Candy Corn, 2007). Her paintings of marbles are wonderful, filling the page with a riot of colour (Cat’s Eyes, 2011)

This artist’s work is reminiscent of the 17th century Dutch painters with the rich, hyper-real colours and the black backgrounds. It has a modern feel with simpler composition. I absolutely love it, especially the eggs and the cotton reels. 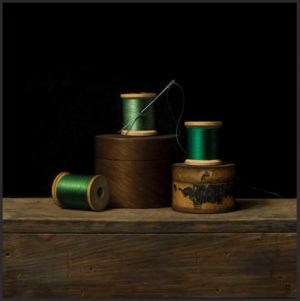 Through this research point, I have formed the impression that contemporary still life often seems to carry symbolism that is very personal to the artist. For example, Margaret Morrison’s subject matter is a relatively recent change following diagnosis and treatment for breast cancer. She ‘turned to imagery which to her presented physical and psychological therapy. Bold colors, large scale candies and toys started to predominate her paintings’ where her palette was previously muted (widewalls.ch). Perhaps this highly personal connection has always existed between artist and subject but simply was not documented in past centuries.