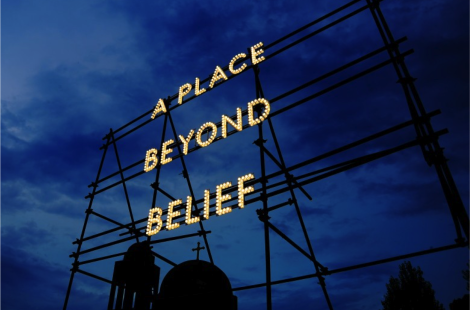 It looks like an advert for a carnival – ‘come and see this wondrous place you won’t quite believe’, then I notice the silhouetted church and wonder if the context is something else, does ‘belief’ refer to religious faith?

Questions to ask to make sense of the piece would be around the presence of he church, which leads to whether the work relates to its surroundings – is it site-specific? Is it a comment about religion? What is the concept behind it?

The text is ambiguous, both the word ‘place’ and the word ‘belief’ have several meanings, both alone and in combination with each other.

Coley is a conceptual artist. He makes objects ‘that speak in his absence’ http://www.parafin.co.uk/nathan-coley–films–tate-shots.html (accessed 26/01/20)

He believes that it is important in this fast digital age to make things without any purpose other than to be looked at.

Ideas he is interested in are location, specific places, how people articulate their moral or religious or social ideas, http://www.parafin.co.uk/nathan-coley–films–a-place-beyond-belief.html (accessed 26/01/20) also how communities create architecture that relates to how they see themselves http://www.parafin.co.uk/nathan-coley–films–tate-shots.html (accessed 26/01/20)

He chooses phrases that relate to particular events and opens them up to interpretation by the viewer. In interviews he often ascribes more than one possible meaning to elements of his work. He asks questions with his work.

After listening to that Nathan Coley’s monologue about the piece, I understand that the word belief most likely refers to religion, or at least to  preconceptions. Place does not refer to location, it refers to a state of being of human society.   The work is actually situated  in Pristina in Kosovo, between the Christian   church that Milosevic began to build in this largely Muslim community,  and the library. 

This contextual information has altered  my response to the piece. I can see that it is far more political than I first perceived . My views have changed in that I feel I understand it better and am more certain that it is a hopeful symbol to be projected to the international community by a young country eager to escape the label of being war-torn. It asks us to learn from past horrors that we must stop doing damage to those with different views and values.

Contextual information is important in order to understand contemporary art on a deeper level and in the way that the artist intends. I don’t believe it’s essential in order to experience art in a valuable way- a viewer may simply enjoy the superficial aesthetics  of a piece – but it supports a richer and more enduring encounter.

I think the piece has a simple beauty in the dark, it grabs attention immediately and makes the viewer wonder about its meaning.

Coley uses this theme of words or phrases picked out in light-bulbs in several pieces. Most of them have been shown in more than one location, here I assume Coley is playing with the site-specificity of the phrases and seeing their meaning changed when mounted somewhere new.

He also uses cardboard extensively. I like his commentary around ‘The Lamp of Sacrifice, 286 Places of Worship, Edinburgh 2004’ (2014), piece which is “a snapshot of a place and its faith”, he talks about using cardboard, the cheap material we use to keep valuable things safe. Coley likes the contradiction between the ‘nothing material…. [with] no inherent beauty or strength to it’ and, for example, richly adorned Catholic chapels where the materials have value and metaphor. http://www.parafin.co.uk/nathan-coley–films–generation.html (accessed 25/01/20). In another interview he talks about the response of viewers being to look for their world. The cardboard buildings are not laid out to correspond with their location in the city, and people look for those they recognise. https://www.youtube.com/watch?v=qyQEiHw7WkM (accessed 26/01/20)

There are clear connections across his work, architecture and society are the underlying themes.