This exercise is designed to allow me to understand how to make marks that express a feeling.  On each of four A1 sheets of paper, four panels are delineated by lightly folding the paper. In each panel a different medium is used, and on each sheet a different emotion expressed, the idea developing from panel to panel.

Apparently I am fairly conservative in this respect and found this exercise unexpectedly difficult at first. In each case I worked anti-clockwise from top-left.

This started well. I used a soft pencil and inscribed flowing lines in time with the rhythm of my breathing.  The most calming presence in my life are my cats. The rounded shape in the middle of the piece is an expression of the focused, centred feeling they give me and calls to mind their small curled sleeping bodies.  I next tried willow charcoal, which I had never used before- I’m hooked!!  This was bordering on meditation!  And then I picked up the oil pastels.  Whilst using the charcoal, the sound of the medium against the paper reminded me of waves on the beach, as did the shapes I had just drawn. Being close to water also has a calming influence on me. I decided to introduce some colour with the oil pastels (in retrospect I realise that use of   multiple colours was not in the brief) to represent the muted hues of a beach but I absolutely hated the crude effect and was left feeling very far from calm! I’ll admit: I gave up, cursorily filling in the fourth segment using pens just because they were the closest medium to hand, and packed up for the day. 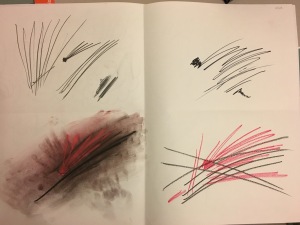 It was easier to inhabit this emotion than would normally be the case, simply by thinking about the ‘calm’ exercise! I am not quick to anger and rarely express it externally, but rather experience it as a slow small nugget that eventually culminates in an internal railing diatribe that nobody ever gets to hear! I found that this feeling translates effortlessly onto paper. Again I started with soft pencil, and found myself indifferent to the result but at the same time certain that the idea was absolutely right. Secondly I switched to chalk pastels and introduced colour- this was perfect for what I needed to convey; I could move the medium across the ground by slashing with open hand and literally hitting the page. I really like this panel. Attempts with oil pastel and pens were again unsatisfactory.

The time when I feel purest joy is whilst singing in choir. I feel it as green. I tried to convey the uplifting sense with energetic shapes, using pens in the first panel but these didn’t capture the richness of joy; the result just looks like a doodle. Chalk pastels in panel 2 worked well because I could add broad sweeps of exuberant colour. Pencil and wax crayons suffer the same feeling of inhibition as the first pencilled panel.

To imply sadness I used slow, downward strokes with low energy. My four panels were done with pencil, chalk pastel, charcoal, wax crayon. I think the chalk pastel is the most effective and expressive, looking small and lonely.

A temporary drawing I have  compulsively done for as long as I can remember is manipulating the ring of condensation left by a cold glass on a table into either a naked tree or rising flames.  Evaporation is the fire dying out.

Drawing with a laser pointer is great fun when you have three kittens!  It reminds me of being a child with a sparkler on bonfire night, trying to write my name in the air before the sparks disappear. Unfortunately I can’t load movie clips and these stills don’t capture the shapes I was creating. 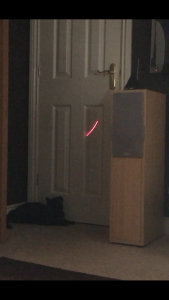 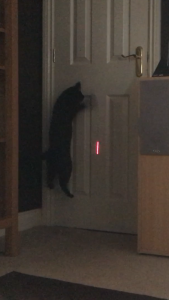